Divide, Jacqueline, and Seth teach Animal Control what it means to own a Tiki Tank before handing over the keys. Many thanks to this amazing trio for their generosity and for entrusting us with their amazing mutant vehicle.

The members of Black Rock City Animal Control would like to thank the Tiki Tank crew – Divide, Jacqueline, and Seth – for selecting us to be the new owners of the Tiki Tank.

We are incredibly grateful and humbled to have been chosen to carry on the Tiki Tank torch. We recognize that the Tank was built with a tremendous amount of attention to detail and an enormous amount of love, and we will do everything in our power to take good care of this amazing art car and continue to make it a mutant vehicle for all of the Burning Man community to enjoy.

We’d also like to thank Divide, Jacqueline, and Seth for going well above and beyond the call of duty in making this a smooth transition. It’s been fantastic getting to know this crew and we deeply appreciate all the help they’ve given us as we prepare to take the Tiki Tank to playa this year.

We also look forward to meeting other folks who have enjoyed the Tiki Tank in the past. We hope the larger community will help us drive the Tank into the future.

Look for more news from us about our Tiki Tank plans coming shortly. In the meantime, please let all of the unlicensed and un-inoculated bunnies of the playa be warned: Animal Control is coming … and this time we have a TANK!

We received much more interest in the Tiki Tank than initially anticipated and had to weigh many factors when deciding on its new home.  We spent many days getting to understand each interested crew, showing off the vehicle, answering questions and documenting our experiences. It was a pleasure getting to know other project-minded groups who share our ethos of inclusion and community.

There are numerous challenges in owning, operating and maintaining projects like this and we wanted to make sure everyone knew what they were getting into. In the end, we feel very confident we chose the right crew to take what we started and to continue building on it.

Thank you to everyone who has helped us over the years in building, fixing, running, modifying, re-engineering, unfucking our mistakes and providing every kind of support.

We also want to thank all of you who have participated as passengers, spectators, or have joined along on our adventures.  Sunrise on the trash fence won’t be the same without you.

UPDATE:  We have found new owners and are in the process of transitioning ownership

Tiki Tank Crew will not be going to Burning Man this year and we have decided to sell the Tiki Tank Mutant vehicle.  We would like to find a passionate crew to operate and pass on the goodwill and reputation we have developed over the years.

It is currently registered with the Burning Man DMV for 2016 and any transfer of ownership will include coordination with their licensing.

Burning Man 2010 was plagued with soft dust dunes all over the city and playa, making it difficult to bike around. After multiple bike spills, Jaq and I decided to walk around, hoping to jump on art cars whenever possible.  Turns out many other people had this idea too and most vehicles were fairly overloaded.  Our attempts to hitch rides were quickly shot down by excuses of “you’re not pretty enough” , “you’re not part of our camp”, “you don’t have the VIP pass”.

At that point we decided: “Fuck you, we’re gonna build the biggest art car we can and allow anybody and everybody on it”

Built in just a couple months, the design was very simple. Using primarily wood and LED rope lights it allowed us to ferry people around and provide a platform for entertainment.

Improving on the design from the previous year by building steel framing for an upper platform.  This allowed more people to ride, but also taught us a lot about entertaining a larger crowd.  Build goals included quicker assembly, easier egress for passengers, multiple event versatility.

Complete redesign of the whole vehicle.

With the Cargo Cult theme announced, we knew we wanted to build a tank.  Addressable LED’s were just becoming available and we designed custom electronics controllers to mimic rolling treads when the vehicle was moving.  Permanent wiring harnesses with all wires pre-routed, making assembly plug and play.

Continued refinement of the tank including reskinning all surfaces and much quicker assembly by improving design. New lighting electronics and controllers.   All lights are now controlled via a tablet on wifi with a huge array of lighting effects pre-programmed.   Custom web UI allows for changing of all segments and effects.  Over 2000 hours were put into design and building that year. 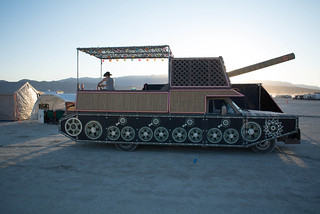 Focus on passenger comfort by improving shade and interior layout, including a bar.  Additional lighting effects and further improvements in ease of assembly. Source code: https://github.com/hmflash/tikitank 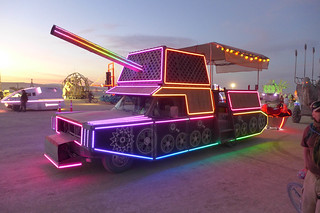 Videos of the tank:

While not complete, there is a build log on this site, scroll through the past posts: http://www.tikitank.com/

We want a crew who will carry on our tradition of being an open, inclusive platform.

Special thanks to everyone who help work on it over the years.

2015 was a huge success!!  We put on almost 250 miles on the playa this year.  Watched many sunrises, made many friends and gave countless rides!

Someone even decorated the daft punk skeleton with our koozie!

Parking lot test of the vehicle speed sensor and of the “hover” tread effect.

Final tuning on our art car, Tiki Tank.. See you all in a few days! from BurningMan

Cruising around at Night

We had a blast at Burning Man! People loved the Tiki Tank! A full Flickr photo set is available here

The lights look awesome!  They worked perfectly when rolling at speed.

After many hours of soldering, we finally got lights all wired:

Blog for the Seattle based Tiki Tank Mutant Vehicle!